We've written about the uniqueness of the Pacific Northwest in crapcan racing before with 24 Hours of LeMons races producing inexplicable results and with ChumpCar World Series producing a nail-biting battle at the end of a 36-hour race.

That said, the entry list for this weekend's Pacific Northworst LeMons race at The Ridge Motorsports Park has simultaneously floored and stumped us here at The Rusty Hub HQ. Why? In short:

- It has more variety than we've ever seen before. The entry list has 52 teams, but there are no more than two of any type. The doubles include expected types like Integras, Mustangs, Camaros, Escorts, RX-7s, Supras, Jettas and Saturns. But it also includes pairs of BMW 2002s, Austin Minis and--somehow--BMC ADO17s (both Austin-badged).

- Only one previous winner is registered and there are no clear-cut contenders after that. Basically, half of the field is in play.

- Even the team we might predict as a Class B favorite has had a problematic racing season.

Early-week weather forecasts call for mild temperatures and a dry track, meaning that weather shouldn't be a factor, so we'll be interested to see how the race shakes out over the weekend. As always, you can make your own predictions based on the unofficial entry list, which you can find here.

Email ThisBlogThis!Share to TwitterShare to FacebookShare to Pinterest
Labels: 24 Hours of LeMons, Pacific Northworst, The Ridge

Sharknado actor has driven in LeMons? Of course he has


Thanks to a note in The Rusty Hub's Totally-Used-All-The-Time Tip Line, we've learned that the 24 Hours of LeMons can boast that they have Possibly Actual Hollywood Celebrities among their driving ranks.

Pictured above-center is Ian Ziering--in the news of late for his role in the campy SyFy movie/Internet sensation Sharknado--whose LeMons resume includes past appearances in the Faster Farms Plymouth Belvedere and more recent stints in the Mazdarachis Mazda RX-7.

Ziering also appeared on something called "Dancing With the Stars," which is not a Carl Sagan-narrated program about spacewalking but rather some kind of "reality television show." He also spent most of the 1990s as a cast member from "Beverly Hills 90210," which is not a show about mail carriers.


This has been the inaugural version of Possibly Actual Hollywood Celebrities.

We missed live updates on ChumpCar World Series' Shortest Longest Day at Nelson Ledges Road Course last Saturday, but it appears to have been yet another very competitive long-form (14 hours) race with a trio of experienced teams outlasting the competition to stand on the podium.

The super-fast V6-swapped Toyota MR2 from MR2 Biohazard took the overall lead early on Lap 88 and never looked back, remaining in P1 for the race's final 460 laps, giving the fast MR2 its second win of all time and second podium of the season.

Maybe the biggest story of the race, however, was the appearance of the Will Race for Beer Saab 9-5, perhaps better known as the team that ran almost perfectly for 35 hours and 55 minutes of the previous weekend's 36 hours race in Spokane. Yes, the RBank Racing squad came back for more and finished P2 for the second week in a row. 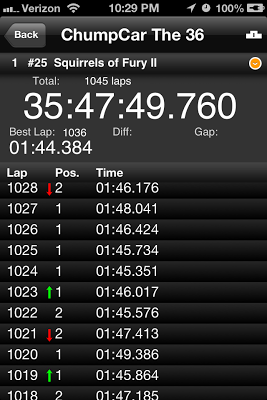 In a far-flung corner of the United States, 49 race cars gridded up last Friday night, nerves jangled and jaws set in anticipation of a weekend-long meatgrinder of an endurance race.

Most teams knew they'd face unforeseen challenges, both of man and machine, over an endurance race the length of which none could fully prepare for.

The green flag dropped in the dark of night around 10 p.m. at Spokane County Raceway; the odyssey that had just begun would seen two sunrises before the starter held the checkered flag aloft before the Last Car Standing crossed the start finish line.

Thirty-six hours of racing, of exhaustion, of fun, of long lulls, of frenzied bursts, of camaraderie, of teamwork, of failure, of heartbreak and of triumph.

When the dust settled, only one team managed to avoid any serious mechanical maladies to take the checkered flag: Squirrels of Fury in their Volkswagen Rabbit earned their keep as the winners of America's Longest Endurance race, ChumpCar World Series' "The 36."

None will dispute that they earned it, quietly running what amounts to a perfect race for 35 hours before trading blows with crapcan heavyweights Will Race for Beer in their Saab 9-5 in a final-hour sprint that would have given Tom Kristensen ulcers. The title of Conqueror of 36 Hours hung in the balance for that hour until Will Race for Beer--who had towed their two-Saab team from the New York--broke their second CV joint with just four minutes remaining while they held a slim three-second advantage over the Squirrels.

It was a moment of pure heartbreak for the Saab squad, who received a sportsmanlike push around the track from the Rusty Igloo Racing Honda Civic to complete their final circuit. The final results show a two-lap margin of victory for Squirrels of Fury, but few will forget how close the race really was.

Will Race for Beer led an astonishing 918 of the race's 1,055 laps (87 percent of the race), including 902 consecutive laps after taking P1 on lap 116. They led by as many as 15 laps over the Squirrels of Fury, who themselves sat in P2 for more than half of the race.

With about three hours remaining and eight laps in hand, the Saab broke its first CV joint--the same issue that knocked them from the lead at ChumpCar Daytona in May--but the car turned laps about 20 seconds off the race pace while the team prepared to swap in a new axle in the hot pit. Will Race for Beer managed the fix and came out still in first place, but their lead had evaporated to just 30 seconds. The Saab driver responded by turning the car's fastest lap and their lead extended to well over a minute for the next hour.

However, a full-course caution with an hour remaining bunched up the field. The shootout for the win loomed with both drivers prepared to wail on their machines. With the nearest competitors some 20 laps arrears, the Squirrels driver flogged the Rabbit mercilessly to close the gap from 7.3 seconds down to a nose-to-tail fight for mega-endurance supremacy.

On lap 1018, the Rabbit wrestled the lead away from Will Race for Beer for the first time in something like 30 hours. Two laps later, the Saab squeezed past for the lead again; the Squirrels took it back two laps after that and held it for five more laps.

Will Race for Beer had something left, it appeared, and roared back again to P1 on circuit number 1028. The driver pulled out nearly five seconds of lead before the Squirrels' driver threw down a race-best lap and the Saab found itself with a mirror full of Volkswagen for another six laps.

With five minutes left and the battle for the win looking to be decided by which car used traffic better, the Saab slowed off the pace and came to a stop with its second broken CV joint.

It would be easy to suggest that the win was ceded to Squirrels of Fury, but that sells short their incredible accomplishment. The biggest part of winning an endurance race is being there at the end; the Squirrels got to that point by running a perfect race and leaving just enough in the car for a sprint to the checkered flag.

The biggest story in the rest of the field was the amazing success of Volkswagens, four of which finished in the Top 10 with two more just outside of it in P12 and P15.

The early hours of the race saw almost all of the first 100 laps led by either NNM Motorsports' Dodge Neon or Martini Racers' Volkswagen Golf. Martini Racers would go on to finish fourth in the race.

Attrition rates remained high, but most teams endeavored to fix their crapcans and get them back on the track. This included three cars that were rolled but were repaired enough to take the checkered flag, if not continue racing for a few hours.

Of the race's 49 entries, well more than half took the checkered flag and nearly half (21 teams) ran more than 2,000 race miles.

There were almost certainly hundreds of fixes made during the race and tens of thousands of exciting moments for the hundreds of drivers in the race. Come the checkered flag Sunday at 10 a.m., most participants found jubilation in knowing that they'd made it.

- Read the Squirrels of Fury's recap. Really. Do it. It's an amazing view on teamwork behind pit wall and on the track.

- Get the full standings here. Compare it with our predictions from earlier in the week.


- Read the race discussion and live updates from Race Control during The 36 from the ChumpCar Forum topic here.

- Only four cars led the race, we think. The Squirrels of Fury actually led the fewest of those four cars with just 10 (!) laps in P1. In descending order of laps led: Will Race for Beer (919), NNM Motorsports (63), Martini Racers (48), Squirrels of Fury (10). [Editor's Note: If you're wondering why that doesn't add up to 1,045 laps, that's because we couldn't find out through the records who led laps 1, 2, 56 and 97. So it's possible that four other cars led a single lap each. Anybody help us out with this?]


Tell us your story from the race in the Comments section below, on our Facebook page, via Twitter (160 characters at a time...we like haiku) or through email to eric@therustyhub.com and we'll throw it up on the website. As always, we love pictures of stuff that broke along with a good story on how it happened and how you overcame it.

ChumpCar 'The 36:' The Rusty Hub's Preview

Sounds kind of blasé, we suppose, until we mention that this race lasts virtually the whole weekend: Thirty-six hours of continuous racing from 10 p.m. Friday to 10 a.m. Sunday (local times), making it the world's longest continuous road race.

And it starts in the dark.

If that's not a daunting challenge and the makings of an awesome weekend, we don't know what is.