This weekend, the 24 Hours of LeMons makes the (relatively) short trek to the middle of the California desert for "Button Terrible" at Buttonwillow Raceway Park.

With early-week forecasts calling for triple-digit highs all weekend, Button Terrible will be a grueling affair for both car and team. Like the typical California LeMons race, this one will feature the requisite 150 entries, of which probably about 100 will be running by the weekend's end while the rest sit in varying states of disrepair. Which isn't to suggest that cars on the track won't also be in varying states of disrepair.

As usual, all three classes should see repeat offenders and terrific depth, making it hard to pick a winner, but we're going to highlight some of the teams we think have a shot. If you want the full scoop, check out the unofficial entry list and let us know where we've erred. 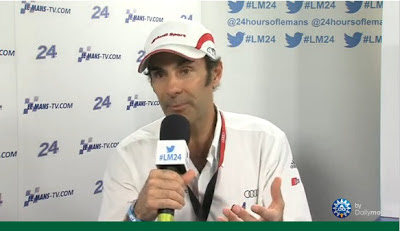 This Porsche 944 driver from the 24 Hours of LeMons' race at Road America is being interviewed on Le Mans TV. We don't have the audio for this video feed at the moment, but there's no doubt he's discussing his heroic push-starting abilities.

I can't imagine what else he'd be talking about.


We here at The Rusty Hub love low-buck endurance racing. We love the camaraderie, the triumphs, the defeats, the creativity, the garage ingenuity and the blat of unmuffled hooptie exhaust.

The racing usually isn't too bad either.

But we also love the glitz and glamour of crapcan's professional pregenitures, not least of all the 24 Hours of Le Mans, which has been the full-day playground of so many of the world's greatest drivers and greatest manufacturers.

Our initial plans called for an irrelevant and irreverent rundown of the competitors at Le Mans (with awful, hastily handsketched illustrations), but we soon realized how comprehensive that task is. So we'll instead point out some recommended reading and handy reference items for this upcoming weekend's 90th anniversary running of the event.

Video: A Tour of LeMons' first 90 minutes at Autobahn

Let's take a look at the first stint from the #333 We're Not Really From Iran Ford Festiva at the 24 Hours of LeMons race at Autobahn Country Club in June 2013. The Festiva--with a swapped-in 1.8L Mazda BP engine from a Ford Escort GT--gets through the field pretty quickly and gives a solid tour through the oft-chaotic opening minutes of a LeMons race.

0:10 - The green flag comes out. Cars with varying levels of pit-to-driver communication effectiveness get the jump at different times. The camera car passes the flag stand at about 0:30

2:02 - Race On the back straight, the race-winning (and also fastest-lap-setting) Save the Ta-Tas Chevy Camaro pulls every other car like they're standing still. Within about 30 seconds, it's just a dot on the horizon.

4:40 The Festiva passes the fantastic NoPro SHO-powered Geo Metro in the braking zone for Turn 1 and finds itself on the back bumper of Full Tilt Boogie's Honda Civic Si and within sight of LemonAid Racing's BMW E30. These three cars battle for your entertainment for the next 10 minutes with some great, clean racing.

5:51 - Team Orca's Chevy Caprice has a spring-mounted tail that bounds gloriously when the former prowler hits some patches in the racing surface.

7:25 - The Boost4 Lexus slows to a halt after seizing its V6 on lap 4. The team was raising money for charity and unfortunately never finished a fourth lap. The mechanics on the team packed it in for the weekend.

9:20 - The Full Tilt Boogie, LemonAid Racing and We're Not Really From Iran trio race hard to the yellow flag covering the disabled Lexus.

15:39 - Here's some top-notch traffic navigation. Early in the race before attrition sets in, traffic can get brutal. As we'll see later, this can also mean long stretches of open track, too.

17:15 - The camera car gets a good run out of Million Dollar Corner (first left turn on the circuit) and carries that speed through the next left hander to just squeak past the more powerful Full Tilt Boogie Civic. The LemonAid E30 balks the Festiva just a bit, but the Festiva driver takes the long way around the consecutive right-handers to take the position.

20:38 - The fur-covered Porsche 924 is run by a University of Colorado alumnus and is a buffalo, although this was lost on the Big Ten audience. It's fantastic to watch the wind ruffle the buffalo fur at speed. This team was likely glad it didn't rain, since it would have doubled the car's curb weight.

23:30 - The #108 Solo Cup Escort gets held up in traffic a bit, prompting a long and spirited dice between the two cars, which share the same engine type. Also notable is both cars passing the white #111 Blue Shells Neon, which shows up a bit later.

24:41 - The green BMW E36 of Futility Motorsports (formerly the Pool Shark) limps onto pit lane. We expected this car to compete for the win, but they had rotten luck all weekend and were trailered with mechanical issues by Sunday's green flag.

32:20 - Like the NoPro Metro, the Knoxvegas Lowballers are still sorting their mid-engined, V6 Metro. With gobs of power and some homebrewed suspension solutions, the handling can be a bit twitchy, as the Lowballers' driver--on the grass facing the wrong way--found out.

33:00 - How does four-wide on a short straight rate on the Pucker-Factor-O-Meter? We're not sure, but it's abundantly clear that the #92 Pentastar Plymouth Duster's V6 is not lacking in power.

40:00 - The green Class C Volkswagen GTI of Kelly's Heros [sic] struggled all weekend, which is evident when you see the speed at which the Festiva closes on it.

58:00 - Just coming into view in the distance is the #555 Sideways to Victory Ford Focus, which the Festiva chases.

1:03:20 - Almost without warning, there's a huge cluster of traffic on the long back straight. Watch at 1:04:00 where the #20 black Chevette Diesel flies around the outside of the final corner to pass a handful of cars, only to get pulled by most of the pack.

1:05:00 - The Festiva gets a point-by from the Schnitzelwagen and then struggles a bit to get past the Duratec-powered Triumph TR7 from James Bondo (#700).

1:07:35 - The #555 Focus reappears after getting passed in traffic a bit earlier. It brings with it the #111 Blue Shells that was passed about 45 minutes earlier. The Blue Shells car was much slower when it was passed, but the driver clearly found his groove sometime in the interim.

1:20:00 - The Festiva comes up on and passes the Team Frag Alfa Romeo Milano, whose roof bears a football field full of plastic soldiers.

1:21:00 - With the fuel tank just about empty, the Festiva limps the last half lap to get back to the pits.

1:22:14 - As the car enters the pits, the red, white and blue White Trash Neon can be seen with its hood up after a brake fire nuked several crucial front-end components.

We'll let Murilee Martin say it better than us when his Winners post goes up on the Car and Driver 24 Hours of LeMons page, but suffice it to say that our predictions were fairly accurate and the Class B race ended in a tight three-car race with heartbreak for a fourth team.

In addition, the story of Capitol Offense will not be complete without telling of Pro Crash Duh Nation's race for the overall win essentially ended when Bambi pranced across their Alfa Romeo Milano's windshield on Saturday, finishing 35th at the end of Sunday.

Day one of Capitol Offense is over and you can expect the usual awesome recap from Murilee Martin on the 24 Hours of LeMons' Car and Driver page following yesterday's BS Inspection post.

And you can compare our predictions with today's standings below.

But we'll tell you this: Three-time runners-up Pro Crash Duh Nation have the worst luck in the crapcan world. While leading the race this morning, Mother Nature turned on them. Their Alfa Romeo Milano clipped a wild deer that had strayed onto the Summit Point Raceway surface, knocking them from P1 and giving the driver the brownest moment of his or her life.

Luckily, Three Pedal Mafia's Boat was running just behind and had in-car video recording. Video after the jump.

The 24 Hours of LeMons will head to Summit Point to wrap up a stretch of three consecutive race weekends, having already hit High Plains Raceway in Colorado and Autobahn Country Club in Illinois in June. Both of those produced first-time winners and guess what? No previous winner is registered for Capitol Offense either. New winners for everyone!

Part of the draw for LeMons at Summit Point is, of course, the shared event with HyperFest. We're still not sure what it entails, but it's supposed to be a good time and LeMons' spectator tickets are good for HyperFest, as are participant wristbands.

Early-week forecasts indicate it could be a wet and crazy weekend on Summit Point's challenging Shenandoah Circuit and we eagerly await the results. Let's see who we can expect to compete in the 101-car field (Get the unofficial entry list here):

LeMons Doing Time in Joliet: Our coverage on Car and Driver

[Editor's Note: Eric Rood receives literally dozens of dollars for working as a LeMons Guest Judge. He is not employed by the 24 Hours of LeMons and works and writes independently of the organization.]

We filled in for regular 24 Hours of LeMons correspondent Murilee Martin while he got a weekend off. Here are the posts from this weekend:

[Editor's Note: Eric Rood receives literally dozens of dollars for working as a LeMons Guest Judge. He is not employed by the 24 Hours of LeMons and works and writes independently of the organization.]

Our coverage of the 24 Hours of LeMons' Doing Time in Joliet can be found on Car and Driver's LeMons this weekend.


Since The Rusty Hub’s main man Eric Rood--who, it should be noted, has absolutely no issue with taking bribes and enjoys quite a variety of fancy microbrew beer--is actually judging the upcoming Doing Time in Joliet race at Autobahn Country Club, he has recused himself from giving a preemptive judgment of the competitors in order to impart some sense of impartiality. This race’s guest previewer is the hopelessly unqualified Alan Cesar, who is by day a writer, photographer, editor, web weasel and social media hack at Grassroots Motorsports.

Alright, let’s take a stab at this. LeMons races at Autobahn have historically been in mid-fall, which usually meant unpredictable weather. Torrential rain, heavy winds, that bone-biting fall chill, or 70 degrees and sunny. This year’s is in June (obviously), so it’ll be... well, about the same, apparently.

You can find the full unofficial entry list with 80 entries right here.