The event has typically featured some terrific machinery and a refreshing lack of BMWs (Last year's race had one E30 and two E28s). However, this year finds an odd assortment of machinery that includes a suddenly inflated amount of Bimmers, namely four E28s, five E30s and one E36. Bavarian machines are in demand, what can we say?

That's not the only quirk of the 58 cars on the unofficial entry list (which you can get here), but we'll get to that in due time. Here's what we expect to see.

No crapcan has ever dominated an event historically the way that Ghetto Motorsports (above) has with the B.F.E. GP. The first-generation RX-7 has won all three prior races at High Plains. Only in 2011 was the race close (about two minutes over the runner-up U-Boat Dodge Stealth). They won by 10 laps in 2010 and six laps last year. We expect Ghetto Motorsports to be the team to beat again.

Challenging Ghetto Motorsports should be the Back to the Past Nissan 300ZX, a team best known as one of the teams to beat at LeMons' Gulf Region races. The Texas squad has made strong showings at several Texas races--including a win at the 2012 Season Ender--but will travel outside the region for the first time to tangle with the best in the West.

As strange as it is to type it, we think a Volkswagen might be the best challenger to the two teams in the field with overall wins. The Jetti Knights and their Jetta have finished in the Top 10 at each B.F.E. GP, including finishing runners up last year. This is one of the most consistent Volkswagens in LeMons and they're hoping to bring success to the German maker, who did not show well in 2012, winning the Deconstructors' Championship.


In a field flush with rotaries and six-cylinders, Team Racing for Cancer Awareness' Acura Integra (above) should be one of the stronger four-pots. They've yet to finish lower than fifth place at High Plains in three races and their Integra should be at the field's sharp end again.

Of the three Bimmers in last year's field, two found the Top 10 and they were both E28s: Colorado Cone Killers and Team B and B. With well-sorted cars, they should both hang near the Top 10 again and be the best of Bavaria.

Token "This could the race for Audi" statement: We think--but aren't sure--that Team Copyright Law's Audi 90 on the entry list is the same Audi 90 run under the Ow-Dee moniker the past three years. If so, this could...well, we already said it. And if it's not the former Ow-Dee heap, another Audi 90 (this one a Coupe) from Flying Brick can probably fail just as spectacularly.

It's worth noting that this race features five RX-7s. After Ghetto Motorsports' whip, the Mazda 787b NOT stands the best chance at a win. The OZ Ski Team RX-7 may or may be the same car as last year's Texan Ski Team, who have also run well in the past. The cleverly named El X7 hints at a V8 swap, which are fairly common in crapcan racing and have performed reasonably well in the past.

Roadracing-Jeep fanatics Team Petty Cash will debut a new entry at High Plains, as well. But they will not be racing a newly prepared Jeep; this will be their first outing in a super-cheaty BMW E30 packed with Cheatonium. Among others, the team includes TPC regular Matt Adair and the most experienced LeMons wheelman in history, Anton Lovett, both of whom can put together a solid race if their Bimmer holds together.

Want our tip(s) for a longshot? We'll hedge our bets on two of them: IGOTTAP's Honda Prelude (above) and Los Diablos' Toyota Supra. It's well known that no Prelude has ever won a crapcan race and that Supras blow up way more than the average crapcan (but an average amount for Toyotas). That said, we have a hunch that either or both of these teams will make a strong showing at High Plains.

More than any other race we've previewed, this race's Class B is unclear as to who may end up there. Last year's Class B winner was the aforementioned Cancer Awareness Integra, but they're likely to have graduated to Class A. Similarly, the 2012 runners up in B were the Weapons of Grass Destruction Volkswagen Golf, which can be a borderline Class A car. If either lands in B, we expect one to come out on top of the class.

A pair of Honda Preludes from Planeteer Racing and Car Wars - Return of the Junkers both ran in Class B last year and could compete if they're classed the same.

Ford Escorts are well regarded as good Class B cars, so we expect Geezer Escort Service (above) to come into play in the middle class.

Beyond that, we're not ashamed to admit that we're stumped. There are a lot of borderline cars that could be Class A if they're laced with cheaty bits. 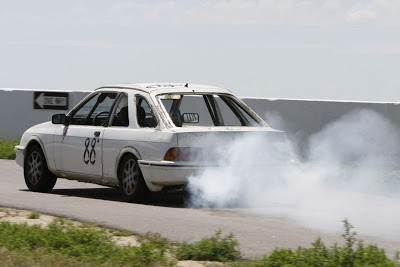 We will, at this point, make special mention of the Merkur Madness XR4Ti, a car resplendent in its failures. It's run ("attended," at least) all three races at High Plains since 2010 and logged 168 laps. Total. In three races. Their best lap total: 108 in 2011. Their worst: 6 in 2010 (pictured above). We'll be rooting for them this time around because we love those flame-spittin' Merkurs more than can possibly be healthy.

This race at High Plains may set the Pyrite Standard for Class C in all future races. There's a lot here to discuss, so grab a beverage and settle in. We're going to break it down by manufacturers because, curiously enough, it all fits together in a disturbingly neat manner.

Let's get this out of the way. The Pit Road Pros (above) won Class C last year in a 2002 Hyundai Accent. Slow and steady (and "new") win the Class C race. As Judge Phil has proclaimed the NSF Racing Plymouth Reliant (we'll get to that in a minute) the new standard for Class C, it seems unlikely the late-model Accent will remain in Class C. If it somehow does, it's probably the favorite and also far and away the most boring thing in the class.

This marquee, for a change, is where things start to get interesting. While we can't say for sure where they're going to be classed, High Plains will undergo an unexpected influx of early 1980s Toyotas, mostly from new teams. Here's a quick rundown of them: Team Moab - Mechanics on a Budget ('82 Celica), Dead Pigeon Racing ('81 Celica), Geezers ('84 Corolla GT, might not be a Class C car) and Pit Stain ('80 Toyota Corolla).


As if that's not enough, Stick Figure Racing/Volatile RAM (above) will have both of their twin-engined Toyota MR2/Corollas there. That's eight Toyota engines in six cars, if you're following along at home. With the development and improvement of Volatile RAM's cars since the MRolla's debut, this could be their race.

California legend Mike "Spank" Spangler is leaving his Harley-powered Prius at home and has registered a two-car, all-Austin team. The twice-Index of Effluency-winning LeMini Autosarcophagy will bring its turbocharged Mini-ness to the middle of the country alongside the always-been-troublesome-even-for-one-of-Spank's-cars Austin America (above). These are the only British cars in the race.

Yes, indeed, the K-It-FWD Plymouth Reliant will make its way to Colorado under the steady hand of veteran LeMoneer Brandon Spears and his Team Syndicate, best known for running the tiki-fied Volkswagen Jetta and a whole pile of Mercedes Benzes. Domestic machinery seems a bit foreign to him, but he's "improved" the Reliant by dropping in a Chrylser 3.0L V6 and a manual transmission. We're interested to see if the power makes a significant difference; it should make the Reliant go from the slowest Class C car to the fastest. With more than 10 races planned for the K car, the odds favor at least one Class C win.  Could this very well be the one?

American Motors products have shown up in the odd race here and there over LeMons' six full seasons of racing, but this race brings an unprecedented three(!) heaps from Kenosha.

Blue Flag Special returns with the Pacer they took to Index of Effluency last year at High Plains. This was one of Speedycop's old cars. Word on the street is that it's sorted much better and should contend for the Class C lead.


Speed Holes Wrenching return with their monstrous AMC Marlin, a glorious mid-1960s beast that should outrun any other Class C machine in a straight line. The real trick comes in keeping the car on the race track and out of the paddock.

The unknown in the AMC stable is the curiously named Crapple Wapple Do Dang Gang, who hope their Gremlin can keep pace with the Pacer and hook the Marlin while also (pun goes here).

High Plains' resident purveyors of fine oddities, Rocket Surgery Racing, will debut their Checker Marathon. We're not really sure what to expect, but this is the same crew who ran the Futurama-themed Renault 4CV last year, so we expect nothing short of greatness. We're not sure if it's got the legs to win Class C, but it should be in the Index of Effluency discussion at the end of Sunday.