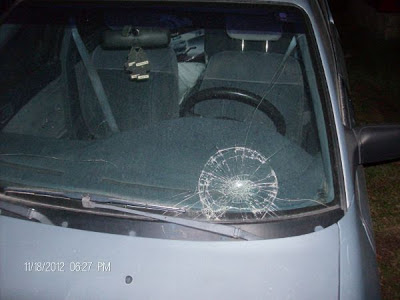 Sometimes, literature and CraigsList embrace minimalism so completely as to be breathtaking. Occasionally, these minimalist worlds collide:


"For sale is a 1993 Mercury Tracer. For the most part it is in good condition. Does have some body damage done to it as seen in photos. The windshield is also going to need replaced as it has an indent from a neighbor kid. Gets around 30 MPG Hwy. We replaced the door on the passenger side so the door on that side is white instead of light blue like the rest of the vehicle (as seen in photos). We replaced the fuel pump in it. It is an automatic with around 150,000 miles. If any questions please feel free to ask. Please include a phone number to avoid scams! Thanks for looking" [Editor's Note: Our underlining for emphasis]

As is taught in literature classes, the readers have no choice but to consider that the author intends every word to be written exactly as-is.

Using the exact words, we're led to believe that the "neighbor kid" was the instrument by which the "indent" arrived on the windshield. Anything beyond that is wild speculation--which we're of course not prone to do--but our imaginations arrive at no small number of scenarios through which this is possible.
Posted by Eric Rood at 12:22 PM