If you don't know the history of Merkur (pronounced "Fail-yer")--Ford's attempt to rebadge European Fords for domestic consumption--I'll spare you the details. Just know that it didn't work and most examples have long since been dragged to the crusher.

Merkur built the Scorpio in the 1988 and 1989 model years and it could be considered rare, albeit non-collectible. Let's take a look at two that examples we found in a recent Craigslist search.


The first Scorpio comes to us from an unlisted part of the Kansas City metro area:

"Selling my Scorpio that runs and drives. It is what I consider 99% rust free. Leaks oil (valve covers oil pan gasket). Tires have 98% tread. Have new KYB shocks and struts. Installed 1 strut and noticed it could use some bushings. Have a lot of extra and spare parts to go with it. Including an extra working transmission. AC clutch fell apart but have a whole extra AC system that comes with it. Has clear KS title and is currently registered and insured. Has the common dead odometer issue so no idea what the real mileage is but it is 135k+. Someone stole the muffler thinking it was the catalytic converter. I have one that will go with it.

If this ad is still up then it is still available."

This is what we expect from a 24-year-old Merkur. $1,100 is an entirely reasonable price for any car, let alone a worn-out car that you could totally rebadge as...um...Ford Scorpio.

So that's a fairly typical Scorpio: Needs some fairly major repairs, but you'll notice most Merkurs keep a cache of spares handy.

As someone who's at least passively interested in buying a Scorpio, you know you're not going to find a pristine example or one that is tricked out or anything because no one in their right mind would do that with Merkur's "luxury" model... 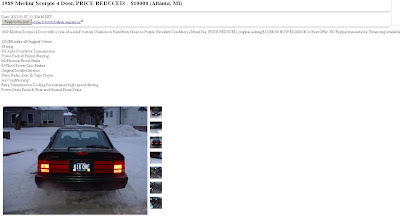 We're particularly interested to note that the miles are all from the original owner, which makes us wonder when during this car's ownership it was glossed up like a chameleon.

It's all a bit odd to see this on a car that, viewed in profile, looks like a first-generation Ford Taurus that's been rear-ended and shortened by a foot or two.

Yet there it is, what can almost certainly be considered the nicest Merkur Scorpio on Earth.