Theme and Livery ideas: The Simpsons

Considering it's probably the biggest pop-culture colander, The Rusty Hub is somewhat surprised that there haven't been more Simpsons-themed crapcans. As far as we can tell, there have been four Simpsons-related cars (though we're possibly missing some; call us out in the Comments section):

So let's take a look at some potential Simpsons themes and what you might need to do to make them happen. 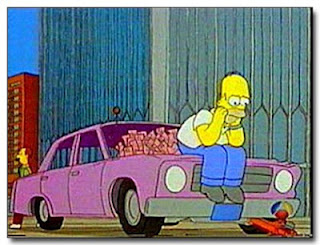 Like we said above, this one's already been done really well with a mid-1980s Chevy Malibu. Debate on what type of car it's supposed to be abounds, but at various times in the show, it resembles a late-80s Cadillac, an early-Malaise Era Plymouth Valiant, or a Fiat 124/Lada Riva. Get one of those cars, some pink paint, and a boot. Then maybe you can compete with the Homersexuals. But probably not. Don't forget the souvenir license plate. 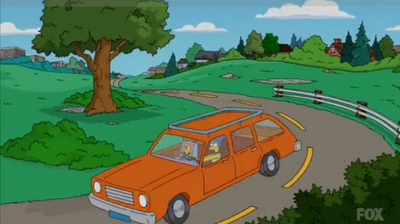 Like Homer's car, Marge's wagon is not really a specific make and model. At times, it closely resembles a 1973 Chevy Malibu wagon, but good luck finding one that hasn't been chewed up by the crusher. A replica can probably be pulled off with any old wagon, but in the spirit of finding a truly terrible car, aim for a Peugeot 504 or 505. Slap on some red paint and put some sort of recalled, death-trappy carseat in the front with a Maggie doll in it and you're on the right path. Don't forget the souvenir license plate.

The Rusty Hub enjoys most minor characters from The Simpsons, but we are unflinchingly gay for Moleman. No character embodies crapcans as well as failure-prone sad sack Hans Moleman. For the unfamiliar, here's a highlight reel of his appearances on the show. If you already have an AMC Gremlin or a Ford Contour (made famous as the victim of Marge's road rage), then all you need is a defeated appearance and a string of catastrophic failures. Don't forget the souvenir license plate (this one's different, we promise). 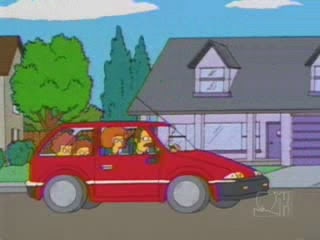 Flanders' Metro was, of course, made famous when Homer overextends his friendship with his neigh-diddly-eighbor, prompting a clever Terminator 2 spoof when Ned says...well, just watch the scene. Chances are, you've already seen it. I'm not sure the scene packs enough material for an entire theme, but if you can find a Metro, you can probably paint a nice Billy Graham's Bible Blasters livery on it or make it the Leftorium's company car. 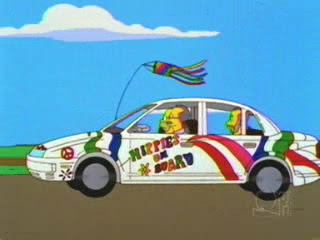 Homer's quest to find his middle name and his mother's roots bring him into contact with a couple of aging hippies--voiced by George Carlin and Martin Mull--who sell organic vegetable drink and drive a Saturn. Homer takes them on his version of a Freak Out. To pull this off, you'll need a Saturn, multicolored paints, a wind sock, and Billy Joel's "Uptown Girl" on loop. Patchouli is optional, but the souvenir license plate is not. 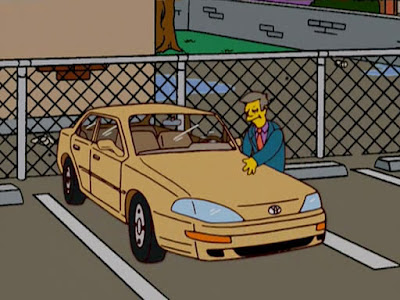 "Ah, 1995. Fine year for Camrys." You will need a beige Camry, an overbearing mother, a frightened hamster, and Vietnam flashbacks. The more plain the Camry, the better, although you may need something to distinguish it from just being a "beige" car. The downside, of course, is that you have the least interesting race car ever built. Souvenir license plate, etc. 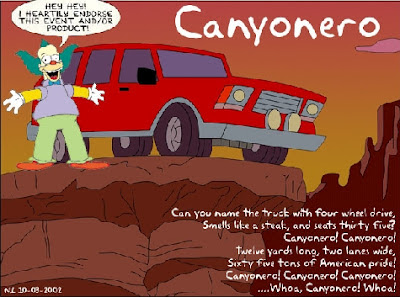 The Canyonero turned Marge into a road rage machine and also was perhaps the show's best automotive parodies. Sing along to the Canyonero song and remember that "unexplained fires are a matter for the courts." Any SUV will do for this; they're all big compared to the typical crapcan. The Jeep Cherokee is probably your best bet here, as a few teams have had success flogging them. Add Krusty the Klown, a lipstick holder, and a nervous-talking salesman named Gil. Forget the license plate here; just make sure it has badging. 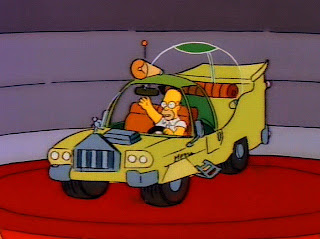 Save the best for last, they say. It's the $82,000 car that Homer designed for the common man, commissioned by his long-lost brother, Herb Powell (voice by Danny DeVito). Naturally, it bankrupts Powell Automotive. As for building it, I have no idea what you'd need, aside from a lot of time and energy. You might start with a frame-based car, but beyond that, good luck. Perhaps a model will be helpful. You'll be a hero when you pull it off.

- Merkur Scorpio in a Hank Scorpio/Globex Corporation livery
- Any of hundreds of Troy McClure's acting credits (The Rusty Hub is partial to "Leper in the Backfield" and "Troy McClure's Pre-Teen Soul Machine")
- An anti-NASCAR/rumrunning Rex Banner car
- A monorail-themed car, preferably with working model railroad on or in the car.
- Stone Cutters' IROC Camaro